I must start off by explaining that the gestation of this blog post has been similar to Shane Watson’s 2013 UK Ashes tour, plenty of false starts that sparkle with promise but ultimately peter out.  Finally, though, here is an update from the Land of the Free.

Back in September, we attended the Global Citizen Concert in Central Park, with Mandy and Maika. The purpose of the event was to end global poverty but if I am being honest that took a back seat as we saw Kings of Leon, John Mayer, Alicia Keys (firming as the next Mrs Connors) and Stevie Wonder. Natalie, as always, displayed her popular culture naivety when she asked “Does Stevie Wonder have any other songs besides I Just Called To Say I Love You?”  Her query was answered by most charismatic stage presence I have ever seen. The only thing that could have improved on the occasion would be if this occurred:

Also in September, I changed jobs and began working at 24 Hour Fitness on 53rd and Lexington Avenue – a block away from our place, which makes the early mornings a tiny bit more bearable. The gym has an affiliation with Derek Jeter of New York Yankees fame (career salary earnings in excess of $253 million) and he occasionally visits the club, which creates mayhem amongst the members. I have been welcomed warmly by the staff and often referred to as Crocodile Dundee, Killer Croc, Skippy and my favourite Kangaroo Jack.  My colleagues also tend to go in for elaborate handshakes upon passing each other include fistbumps and quasi boy-band routines. Sadly, as Ruiz says, I have white boy disease and I am generally closer to knocking myself out than I am to appropriately engaging in their brotherly camaraderie.

In October, the planets aligned and my little brother Stephen and his girlfriend Carmel made it across the pond for a ten day stint.  Stephen brought with him news of Wagga Wagga and the cocksure strut of a Hawthorn supporter. He and I wagered on the 2012 AFL Grand Final with the loser having to wear the winning teams commemorative t-shirt in a series of photos at local landmarks in our respective cities. Stephen held up his end of the bargain and the photos of him at Robertson Oval and the Oasis Aquatic Centre in a Swans shirt warmed my heart. He arrived in New York with a Hawthorn t-shirt and the expectations I would reciprocate. As you can see from the photo from handover ceremony he will be waiting some time for this. 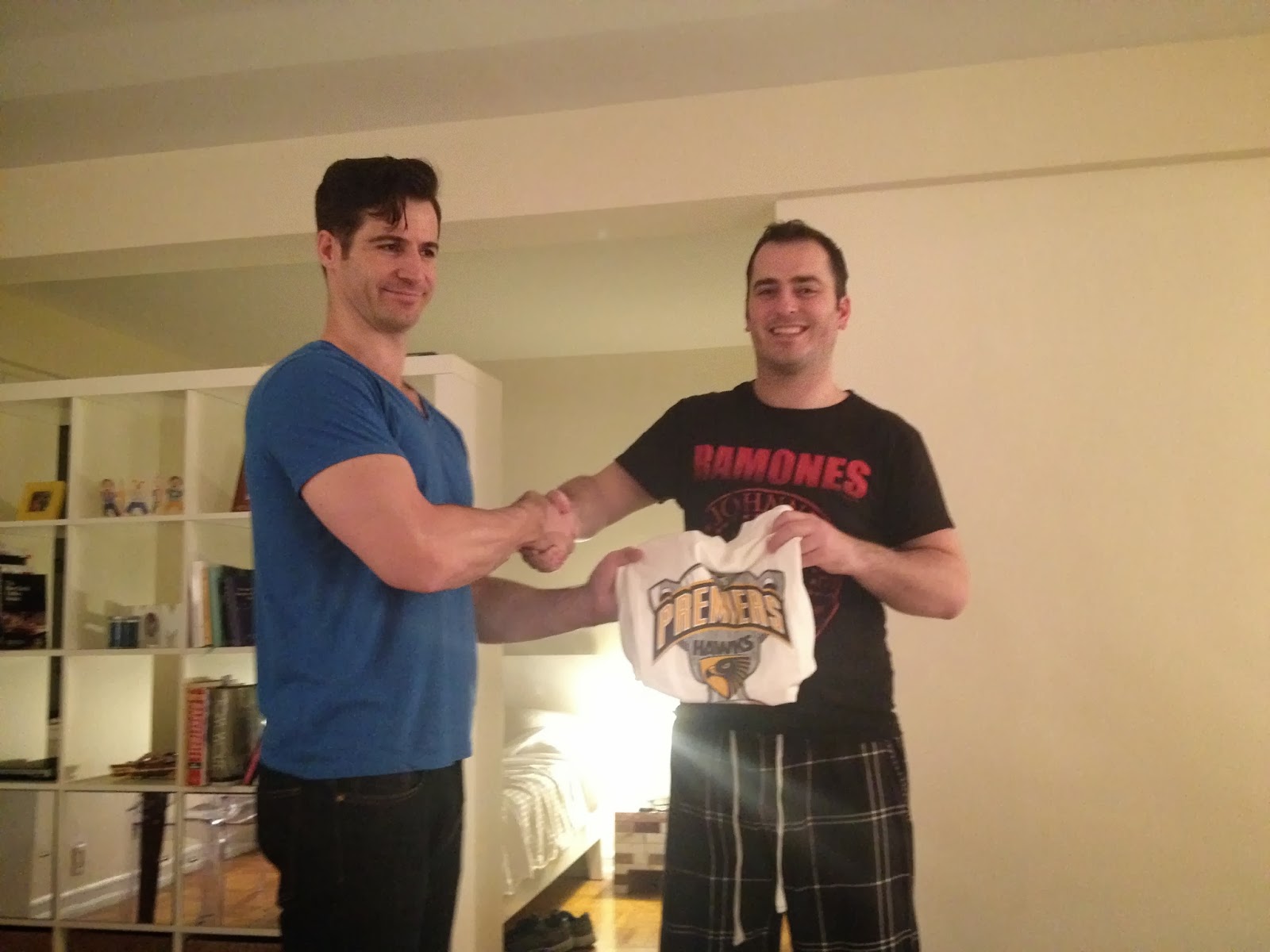 Stephen and Carmel traversed the city, taking in the sights from the Brooklyn Bridge, increasing their cultural capital with a late night viewing of the Lion King and enjoying beers on rooftop bars at sunset. If there were to be a signature image from their time in New York, it would be Stephen consuming pizza and hotdogs with gusto. Not since Papa Guiseppe has one man done so much for the humble slice. The effect of his efforts buoyed the local economy and resulted in our cistern overflowing. I’m not kidding either, let’s just say it was far from pleasant but nonetheless hilarious – well after the fact.

I celebrated my birthday in November by watching the New York Knicks get beaten like a redheaded stepchild at Madison Square Garden by the San Antonio Spurs. The dearth of a contest did not take away from the grandeur of the location and the thrill of seeing such celebrities as Larry David, Spike Lee and Nelly courtside. Speaking of redheads my good friend Goose and his wonderful wife Rebecca welcomed into the world Alfie on my birthday.  I was really hoping for a no-holds barred jelly-wrestling match with Stacey Keibler, but this was the next best thing.

In November, we were lucky enough to score a ticket each to the hottest Thanksgivukkah in town, at the home of John and Rony. For the luddites out there, Thanksgivukkah is a cross between Thanksgiving and Hanukkah – quite an event in these parts. The next such conjoint event will happen in 77, 000 years from now [Ed: True story], so we were fortunate enough to be guided through the cultural maze of not one but two traditional US holidays.  The 14-pound turkey (that’s approximately 7kg, for those playing at home) was deliciously juicy and all attendees made pigs themselves as expected – but the apple crisps with vanilla ice cream dessert won hands down. Natalie’s favourite was the delectable pumpkin soup. 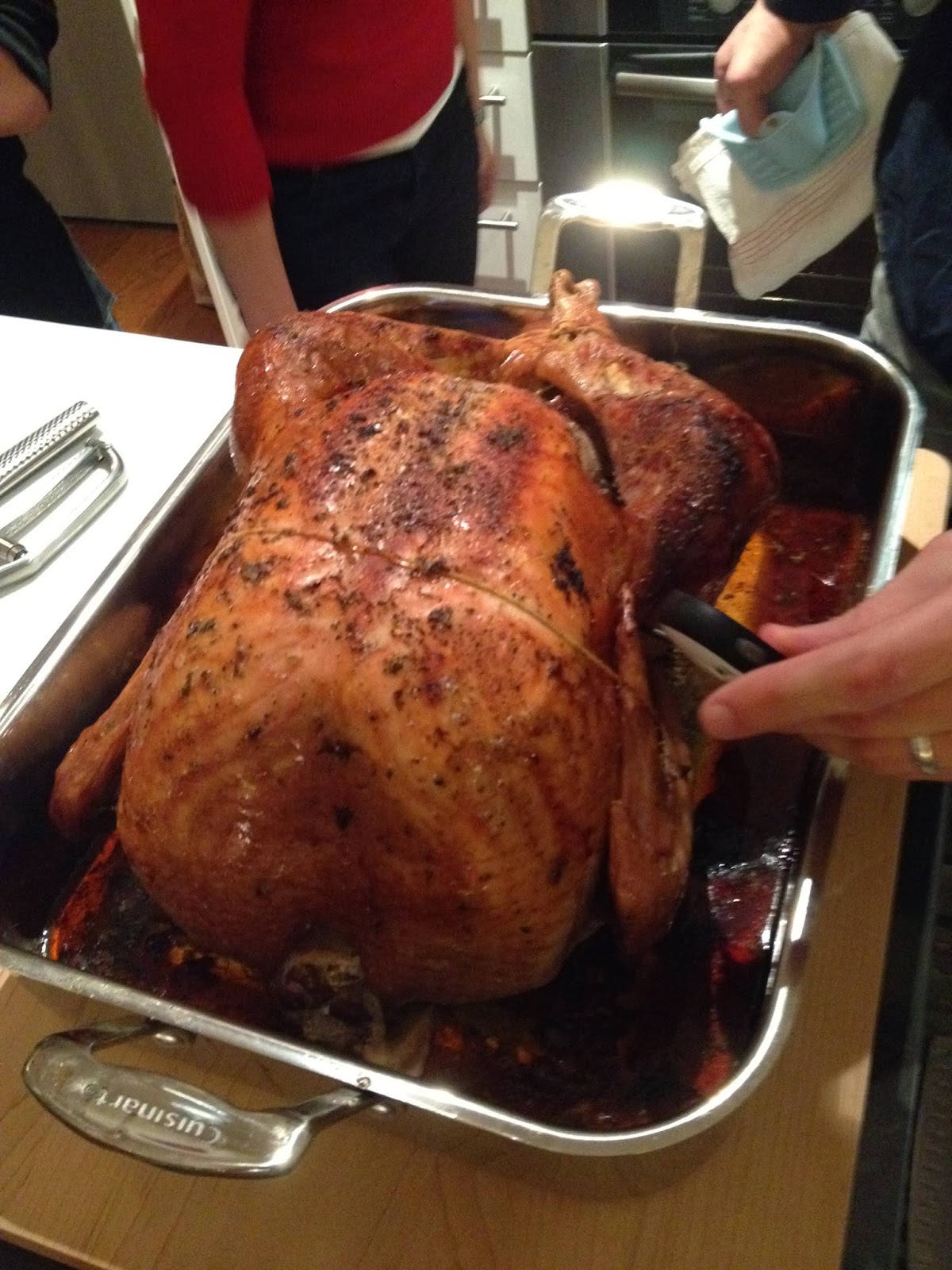 [--Ed: For a full rundown of the gorgeous food at the event, complete with a downloadable excel spreadsheet of ingredients if you want to recreate this at home: http://eatyeats.com/2013/12/16/thanksgivukkah-recap/ ]

Christmas came and went without a fuss. The separation of church and state means that work here resumes on Boxing Day, which means that celebrations were muted in comparison to The Prawn and Cumquat Gin Bacchanal of 2012 (Richard Taggart and Maggie Connors I am looking at you). We did go and see Betrayal by Harold Pinter, starring the scorching hot newlyweds, Daniel Craig and Rachel Weiss. The latest incarnation of Bond was a commanding stage presence radiating intent and malice, while Weiss dithered between love interests before being left bereft of love and happiness. Ten thumbs up.

As we approach our two-year anniversary in New York in March [Ed: and our three year wedding anniversary!], our plans are to attempt to survive another winter (If we had a theme song, the chorus would be Ruiz squealing “I’m freezing my f*cking face off”). For my part, I cannot wait to see Lebron James in the flesh on January 10th, where I can only hope to witness him scoring 135 points versus our Brooklyn Nets, like this:


We will also be returning to Sydney in late March for two weeks for Snowdon and Rani’s wedding, Natalie’s Dad’s 60th birthday and my Dad’s 69th birthday in Wagga. Can’t wait to see you all!
Posted by Nat and DC at 5:14 AM 1 comment:

Invasion of the Gum Leaf Mafia

Things have been really heating up in New York over the summer as the temperature rises and bakes the concrete jungle. The only things hotter than our apartment at 3.30pm are Carlos Danger’s Instagram account, Stuart Broad’s outside edge and Henry Cavil’s shirtless scenes in Superman [Ed: Hottie alert!]. The rise in Farenheit has coincided with the influx of summer visitors at Chez Connors.

Jane Connors conquered her fear of air travel with the help of prescription medication and free flowing airline vino to pay us visit in early June.  Her grandiose boast to complete a Hot Dog Tour of the city both began and ended with a late night visit to the Shake Shack in Madison Square Park on the night she arrived.  She told me that it was a non-core promise.

She was most impressed with Carrie’s stoop in the West Village, the Seinfeld diner in the Upper West Side and the Law and Order steps at the courthouse downtown.  Jane left her mark on the city as she is possibly the fastest walker ever to have graced the Big Apple, comfortably outstripping a busy New Yorker's pace with her long strides and determined attitude. It was like watching Usain Bolt racing pre-schoolers as she weaved her way down 5th Avenue to try on yet another pair of denim shorts. She fell in love with Williamsburg, Brooklyn, where the hipster, artsy scene appealed to her gypsy sensibilities. If initial reports are to be believed, she is already planning a return trip next summer. We'd love to have you back, kiddo.

Paulie Evans dropped in on us for a week during the Fourth of July celebrations. Dr. Evans had been mixing with the intelligentsia at a conference in Rochester, where he will take up residency next year. It will be great to have a great friend so close to us. He will also help revive our famous Belmore St rendition of Salt N Peppa’s  “Push it”, as Natalie’s dancing talents do not lend themselves to hip-hop vibe that Paulie and I are renowned for. While out and about in Manhattan, he was warmly received at The Eagle , where he danced the night away. Paulie was vague on the evening but from his description I would imagine that the following occurred:

Paulie also managed to tick an item from his bucket list when we crossed the Brooklyn Bridge on a scorching hot day.  He fought through his blisters and Ruiz’s shoe collapsing to complete a journey every bit as epic as Frodo’s to Mordor. In our defence, we did not have a fellowship of nine assisting in our quest, so I think ours was definitely the tougher challenge.

We celebrated Natalie’s 28th birthday for the umpteenth time on the 19th of July. The highlight of the day was the surprise arrival of her sister Tania. Natalie was completely unaware of Tania’s plans and was speechless to see her standing in our living room/dining room/hallway /library/etc. The only person I have seen that has come close to Natalie’s level of incomprehension and incredulity is Shane Watson after the result of yet another failed DRS lbw review has gone against him.

Natalie was impressed by my ability to keep mum on Tania’s visit, as Tania and I had been conspiring for over three months. As I told her, that was just one of the many secrets that I keep from her. I said that Don Draper is not just a fashion icon to me, he also is a role model. Natalie then asked: did that mean she was my second wife and that my entire existence was based on false premises and an elaborate cover up of an unsavoury past? I must admit that I hate it when she uses her logic to puncture my fantasies. [Ed: Is my husband the only one who perpetuates a self delusion that Don Draper is based on him? Anyone? #headcase]

The Ruiz reunion proved to be a tour de force of cocktail consumption, with the sisters testing the stamina of the very best of Manhattan’s bartenders and the limits of their own livers’ regenerative powers. Tania’s non-cocktail related highlight of her trip was being singled out to be serenaded by a barber shop quartet on the subway to Brooklyn. Their version of My Girl by the Temptations was uplifting and capped off a wonderful week, full of laughter, memories and numerous pisco sours. [Ed: Love you!! xx]

In other news, Natalie’s star continues to rise as she has now been given a team to oversee as a result of her solid output and winning ways. She has researched the topic of leadership and management thoroughly and has established her philosophy on the topic. She talks about KPIs and developing synergy and a host of other buzz phrases. I have full faith in my wonderful wife to make a roaring success of this new challenge. However, I don’t think it will be too long before her true colours emerge and her staff have to deal with episodes like this:

Just before signing off, we would like to extend our congratulations to Snowdon and Rani on their recent engagement. I’m still recovering my sight from the F-Off diamond Rani was sporting in our Skype chat. Well done on raising the bar. Congrats and loads of hugs to Rodolphe and Jaqi on the birth of their beautiful daughter, Gabrielle, we’re over the moon for you! We’d also like to send a get-well message to my fitness consigliere, Jonathon Andrews, who has been dealing with some health issues but will soon bounce back to true form. Here’s a photo of us in happier times to aid your recovery:

Manhattan Chronicles (or The time when Nat spoke to Jay-Z for two seconds and wouldn’t shut up about it. Yes, it really happened. Don’t ask.)